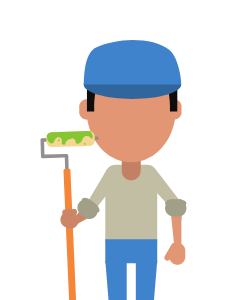 Adding a new lick of paint to your home can really help to breathe new life into the property. However, painting your home isn't always as easy as it looks. The articles posted on this blog will help you to choose the rights colours for the interior of your home. You will also find articles about how to mix and apply paint to your walls so it does not run or smudge. I'm not a professional house painter, but I have spent many hours reading up on the subject, watching YouTube vids and practicing applying paint to the walls in my home.

Painted wall stripes can evoke many different looks: classic, natural and funky, among others. It all depends on the mix of colours, finishes, widths and angles of the stripes. Here are some ideas to consider when having your home painted.

For classic elegance, combine vertical stripes of equal widths. An ultra-subtle treatment involves using the same hue but with varying finishes: flat with satin, for instance, or matte with metallic. Two tones of the one colour, such as pale and deep beige, provide another understated option. Sharp contrast — such as cream against navy — imparts a more striking effect. You can create a more contemporary feel by mixing a range of widths. Another possibility, thin pinstripes, create a chic design, but you should only use them on a feature wall so as not to overpower the room. Vertical stripes are useful for giving the visual effect of higher ceilings.

Horizontal stripes evoke a more casual vibe. You can go extremely wide with the lines. For instance, paint the bottom section of the wall one colour and the upper part another. Give the impression of a chair rail by creating the transition at the right height. Alternatively, use three stripes or more for the entire wall. Horizontal lines make a room seem wider, but they can visually draw down the ceiling. The bolder the hue, the more contemporary the effect will be. In a child's room, create a fun, artsy impact by painting the stripes freehand without using tape.

Diagonal stripes give a powerful sense of movement in a room. For larger areas, go broader with the lines. You could even diagonally break up the wall into two sections, creating two triangular regions. Paint the lower triangle blue, for instance, and the upper one sand.

Sponge painting is a textured painting technique; sponges remove or add glaze to give the wall a sense of depth and dimension. Other decorative techniques include antiquing and marbling. You can enhance stripes by painting one line with a decorative finish with the alternating stripe in a solid colour. Interspersing plain stripes will help to moderate the overall effect and will highlight the decorative texture via contrast. Interior painting services can give you further advice on painting techniques to complement your home. Stripes not only create the mood of a room, but they also alter the perceived dimensions of the space to create more pleasing proportions.